In the eyes of many people, wheat straw is a good material for producing feed and good firewood for cooking. However, in the hands of Hubei Xiantao folk art master Deng Youpu, it has become a beautiful landscape, a crowd of people, lifelike flowers, birds, fish and insects. ...

Wheat straw painting, also known as wheat grass painting, is a kind of traditional Chinese handicraft with a long history, dating back to the Sui Dynasty, with a history of more than 1,400 years. 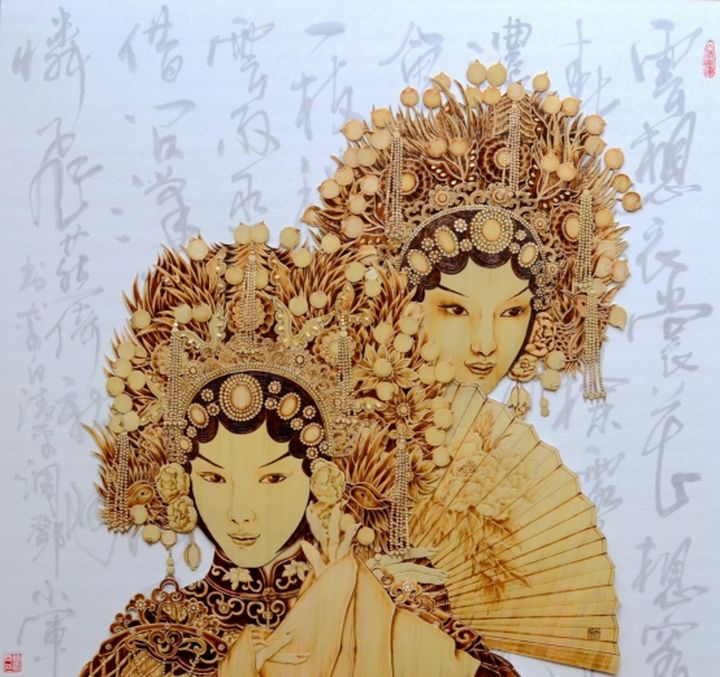 The production process of wheat stalk painting includes more than ten processes such as cutting, bleaching, scraping, grinding, blanching, smoking and pasting. After several generations of inheritance and innovation, the composition is mainly created with the Jingchu culture as the background and the characteristics of Hubei Village as the theme. It has developed from simple plane sculpture to semi-three-dimensional and even full-three-dimensional craftsmanship, making the work both beautiful and beautiful. Environmentally friendly green artwork.
Deng Youpu was born in a family of artists in Xiantao, Hubei in 1947. He started learning to carve shadow puppets and paper-cutting with his parents since he was a child. Under their artistic influence, he also fell in love with straw painting.
After he became an adult, Deng Youpu visited famous teachers in various places to learn calligraphy, painting and seal cutting.
In 1990, Deng Youpu returned to Xiantao and began to innovate in straw painting. He fully inherited the craftsmanship of his ancestors and fathers, and boldly absorbed paper-cutting, shell carving, bark painting, feather painting, calligraphy, Chinese painting, pyrography, etc. With many artistic elements, his works are simple and elegant, with original craftsmanship.

Entering the sixtieth year, his artistic creation has entered the "blowout period". The straw paintings he created have won national awards more than ten times, and have been collected by the Chinese Folklore Museum, the Hong Kong Museum of Art, the Pittsburgh Museum of Art and other art halls.


In 2008, he made a 14-meter-long, 1.1-meter-high wheat stalk relief sculpture "Along the River on Qingming Festival" with 10 kg of wheat stalks. He participated in the exhibition of works by Chinese masters of arts and crafts at the Beijing Olympic Games and also presented it to the Beijing Olympic Organizing Committee. The straw paintings "Bird's Nest" and "Fuwa" worth more than 200,000 yuan.


With the growing popularity, the value of Deng Youpu's wheat straw paintings has risen sharply, and the price has risen several times in the past. The most expensive works can sell for about 500,000 yuan.


In recent years, he has held straw painting training courses in Hubei, Chongqing, Heilongjiang and other places, and taught his unique skills. Now there are hundreds of disciples.